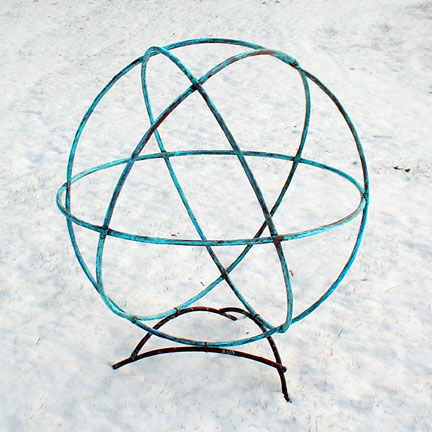 Why are they called ‘crystals’?

Dr. Derald Langham referred to all the solid bodies identified by Plato as Genesa crystals. They, like mineral crystals, have a very specific geometric structures which create an energy vortex.

How does the Genesa Crystal work?

It is easier to explain the effect rather that the mechanism. (I can’t explain how a TV antenna works either). Everyone’s experience is different, but the common thread seems to be the balancing and harmonizing of chaotic energy. The geometry of the structure is simple yet very complex. The crystal is a three dimensional symbol of the geometry that is at the very core of the structure of cells, molecules and atoms.

Does the Crystal have to be copper?

No. Dr. Langham worked with crystals of all different materials, paper, plastic, PVC plumbing pipe. He felt that the geometric shape, not the material was important. At the same time, copper has its own energy and people respond to it favorably. As a sculptor, I love working with copper; it forms well and, of course, it’s beautiful.

What’s the best size to have?

I know from several sources that a 24″ diameter crystal has a radius of effect of two miles. Logic would indicate that the other crystals would affect areas proportional to their size. Thus an 8″ would affect a radius of 2/3 mile, 16″ 1 1/3 miles, and a 36″ 3 miles. The 8″ works well in rooms, offices, studios, etc. The 16″ can be either in or outdoors. The 24″ and 36″ are mostly found in outdoor settings. The decision, however, is entirely personal. Many people muscle-test or dowse for the answer.

What finish is best?

The finish does not affect the energy balancing qualities of the crystals so it is really a personal choice whether to have the polished, shiny copper or the weathered verdi-gris, blue-green, patina. A polished crystal looks marvelous and it has to be polished again every six months or so. We supply a sample of an excellent polish. Left outdoors, a polished crystal will turn brown quite rapidly and after many years develop its own patina. A crystal intended to be outdoors might as well be ordered with the verdi-gris patina already on it.

What have people been experiencing using Genesa Crystals?

One user found that placing a mineral crystal (with its own energy complex) inside a Genesa crystal will broadcast the amplified energy in all directions at once. Someone else reported an increase in their intuitive abilities. A shop owner used a Genesa crystal to reduce shoplifting. Creators of essences energize their essences by placing them inside the crystal. A fifteen year old cat who was dying chose to spend his last three weeks of life lying inside a 24″ crystal. Plants in a psychotherapist’s office began to thrive, instead of just existing, after a Genesa crystal was placed in the room. Another user “felt” the energy field emanating from the Genesa Crystal before it was even out of the box!

Please visit our Genesa Crystals page to view our products.